Day after day on social networking I’ve come to notice a trend.  Group-think is the new Conservative view –the same view that the Conservatives condemn the Liberals for.

In this country we have primaries.  Sometimes our President endorses a candidate and sometimes he does not. Not all the candidates that have been endorsed by President Trump -whom I happen to LOVE with a capitol L- have been the best candidates and they have not all been the winners.  We do have people in this country who think for themselves –thank God.

In Florida we have a race for Governor with a dozen or so candidates.  Donald Trump endorsed Ron DeSantis and someone I admire very much, Ron Paul, endorsed Bob White.  My choice is Bob White. I like where he stands on the issues including jobs, education and corporatism in the Florida legislature.  These issues are very important to ME and I agree with him. So I took it upon myself to help his campaign and to try to awaken other people to the fact that he’s a pretty damned good candidate.  It’s a free country, we have a 1st Amendment and I am not an advocate for Group-think.  I thought my fellow Conservatives and Republicans were against this sort of thing as well since it’s what I see them faulting liberals with day after day on Facebook & Twitter –but it’s funny how it’s AOK when they do it or don’t agree with you.  In most places that’s called hypocrisy.  And I really hope that we are not resorting to that sort of thing.

Today I’ve been called stupid by a fellow Republican Conservative and Biker.  Yesterday I was verbally gang-hammered by Bikers for Trump. ALL BECAUSE I chose to think for myself and look at the candidates and make a decision of whom I agreed with the most and took it upon myself to help their campaign.

I could go on and on but I’m going to stop here.  If we don’t want to turn into the very people we protest against, why do we resort to acting like them when we don’t agree?  Name calling?  Vicious verbal attacks?  What’s next?

Lets try to be bigger than that.  We have primaries for a reason.  You can make your decisions during primary time and when the nominee is voted upon then we basically come together and work as one for the side we have chosen that is supposed to represent our values.

I’m so tired of being disappointed in my fellow American citizens. In every direction I look we’re at each other’s throats. Even those on the same side.

If, during primary time, you don’t like a candidate –then just ignore them…but to jump on the hate bandwagon and act the same towards those on your side as you act towards those who are diametrically opposite of your very core beliefs is really disheartening.

I’m a Conservative, A Republican with a side of libertarian. I love my President and my husband and I ride an Indian Motorcycle…..so I think I fit into the groups “Bikers for Trump” or “Trump Voters who Ride Motorcycles” and unless the name of the group is changed to Group-Think for Trump or Zombies With One Brain for Trump then there is no reason to attack me.

And yes, this is me.  I’m a Real Woman and I am voting for Bob White.  This doesn’t mean that if you don’t vote for Bob White you’re not a real woman it just means that I’m a woman and I’m real. 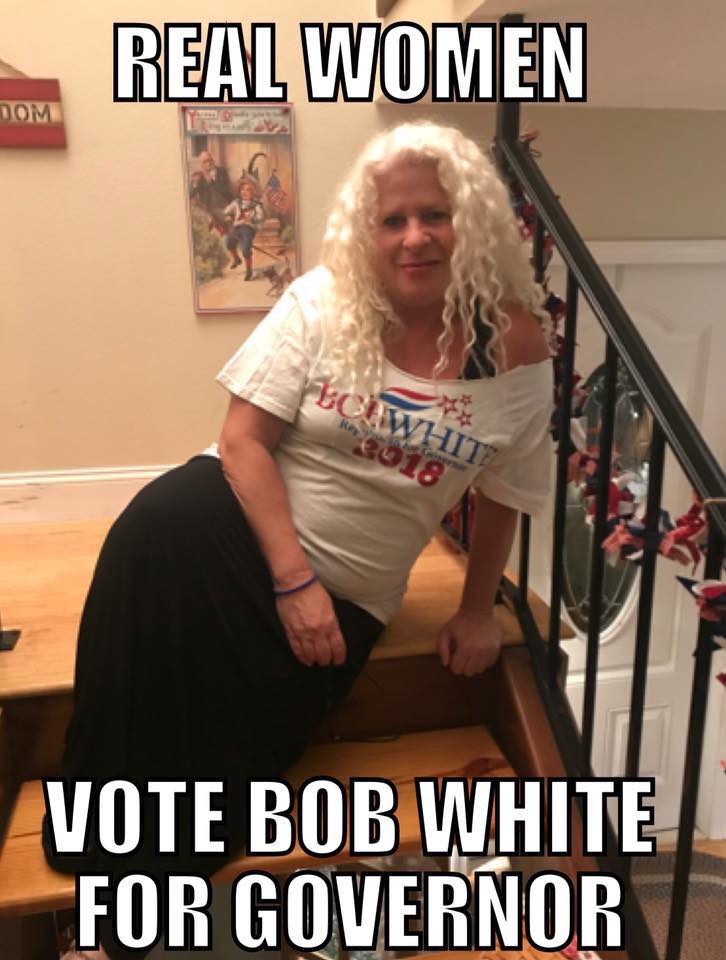